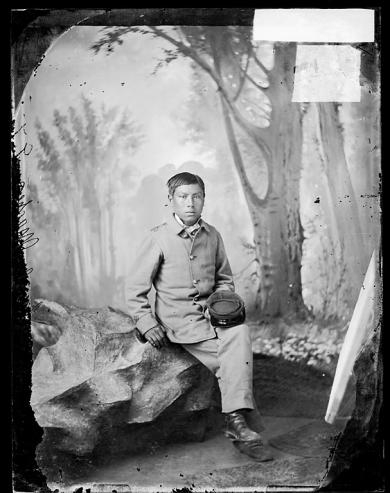 Nah Hi Yurs was among thirty-two young Southern Cheyenne warriors arrested and sent to prison at Fort Marion, Florida, in 1875. His drawings are best known for their passive, almost photographic qualities which dominated the pictorial tradition of Plains Indian drawings. Placing less emphasis on warfare, Nah Hi Yurs provides the viewer with snapshots of domestic life; men on horseback engaged in the hunt, courting scenes, temporary encampments, dance and ceremonial life, as well as images of daily life at Fort Marion. A sense of nostalgia for a former way of life seems to pervade the drawings, together with a high degree of attention to detail in the costumes and personal adornment of the characters.

In April 1878, Nah Hi Yurs, along with fifteen others, travelled to Hampton Normal and Agricultural Institute in Virginia, an educational institution originally established to educate newly freed African-Americans after the Civil War. In June 1879, Nah Hi Yurs took up residence at the Carlisle Indian Industrial School in Pennsylvania, where he took the name Carl Matches. In 1892 Matches received an allotment of land near the towns of Canton and Watonga, in present-day Blaine County, Oklahoma. He died on October 26, 1914.