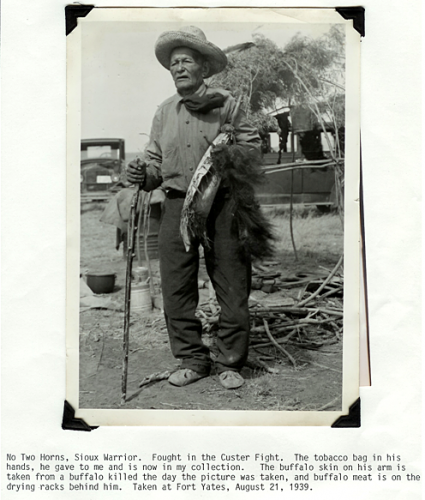 He Nupa Wanica (Joseph No Two Horns, 1852-1942) was a Hunkpapa Lakota born in an area of South Dakota that would later become the Standing Rock Reservation. He became a formidable warrior by the age of 14, as well as an accomplished artist producing work in a variety of materials. He Nupa Wanica was among the Lakota, Northern Cheyenne and Arapaho warriors who were participants in the infamous Battle of the Little Bighorn, one of the most notable defeats of the United States Army on the American frontier in the late nineteenth century. As an artist, He Nupa Wanica was well-known for his carving of wooden horse effigy staffs as well as his painted war shields, tipi covers, muslins and ledger drawings. His artistic output was prolific despite a debilitating injury to his right hand suffered in a buffalo hunting incident. He Nupa Wanica’s works on paper typically depict scenes based on his personal experiences such as war exploits and horse raiding. A distinctive feature of the artist’s drawings is the repeated inclusion of his shield, one of which is now in the collection of the Metropolitan Museum of Art. He Nupa Wanica’s signature shields portray a black thunderbird with rays of light or energy emanating from its spread wings, designed to protect and empower the warrior during battle.